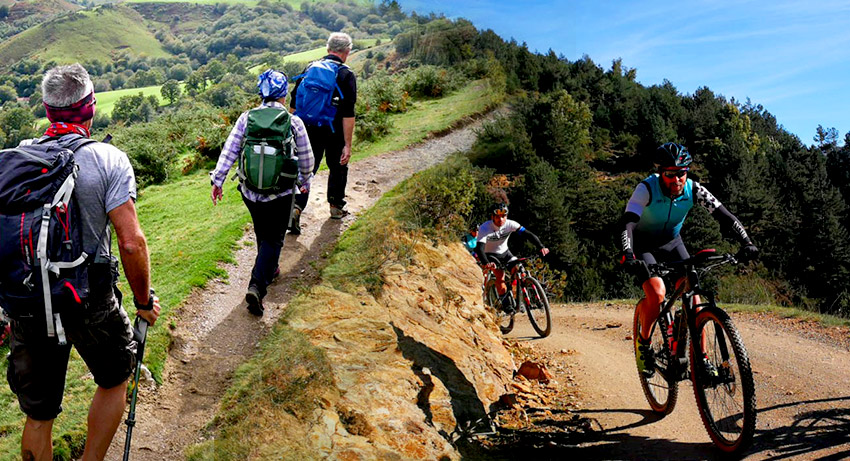 Day two, getting to know each other

In the second stage, the scenery changes quickly. Both teams are in typical mountain terrains, a taste of what awaits them in the days to come.

A stage of contrasts. They set out on a spectacular, and rather cold, day. These conditions followed the cyclists during the tough climb to the La Molina ski resort. From there, with half a stage behind them and pedalling at over 1,500 m, they started the dizzying descent to the floor of the La Cerdanya Valley. Spectacular trails and full autumn colours stole the show on this second and unforgettable stage.

After the first initial flat kilometres on meadows with good weather, the team get ready to face what could be waiting for them in the Pyrenees in coming stages. Wind, a bit of rain, highly technical descents and, on the horizon, spectacular mountain landscapes. The hikers are ready to venture into the high mountains in the next few days. 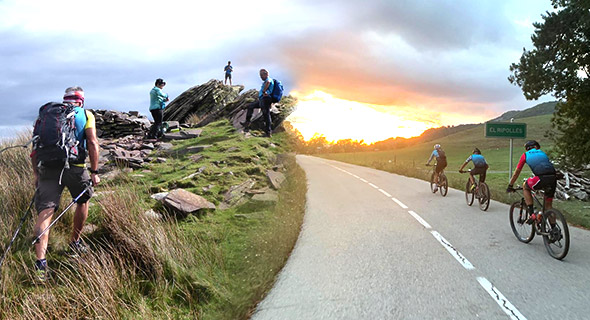 Both teams started at the same time, 9:30 AM. The hikers from Saint-Jean-de-Luz, on France’s Atlantic coast, and the bikers from Cadaqués (Spain), with the Mediterranean in the background.

The bikers faced one of the longest and toughest stages of the challenge, 140 km and 3,000 m of climbing. On this first stage, the team followed the coastline before eventually venturing into more mountainous territory en route to the stage finish in Camprodon (Spain).

The walking route took the hikers over France’s coastal plains before entering the mountains, where they climbed Mount Altsanga (625 m), which gave them a glimpse of the route that awaits them. Once in Sare, they were able to rest and recover for the second stage. 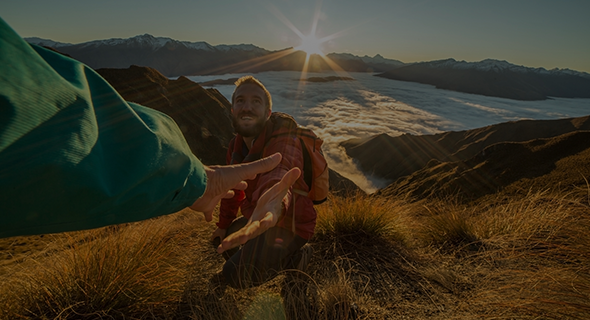 Who has never dreamed of a transpyrenean?

Live the challenge with us and enjoy a complete outdoor experience.
We test our latest GPS: Trail 2

The teams will have to face this challenge in the opposite direction, one team will leave Saint Jean de Luz walking and the other from Cap de Creus by bicycle. Both teams will be equipped with the latest TwoNav GPS: Trail 2, the new GPS for hiking and with a cycling version, Trail 2 Bike.

The challenge will begin the 3rd week of October (October 15th-21st).
Follow us and discover where both teams will meet. 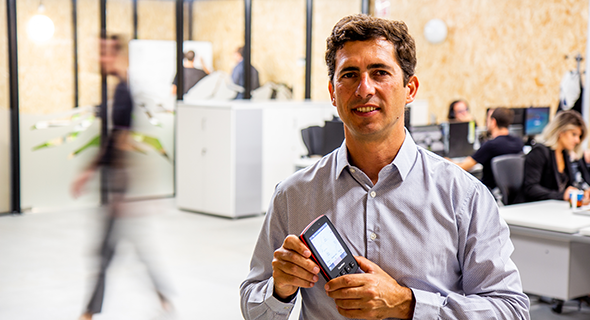 We are so proud to announce a big chapter for us, TwoNav will be totally Made in Spain from now on.

After more than 20 years developing solutions for outdoor navigation, TwoNav set the objective of being able to carry out the manufacture of our products in our own facilities based in Arenys de Mar (Barcelona, Spain). There have been many years of collaborations until we reach the point of having the capacity of development, engineering and manufacturing our own GPS devices.

In a world that has long evidenced the excesses of globalization, TwoNav began 5 years ago, a movement back to our origins, with a local manufacturing. Today we present an Ecosystem of products for outdoor navigation 100% Made in Spain, culminated by the new Trail 2.

These results in a local manufacturing 100% Made in Spain, a collaboration with local businesses and a huge reduction of carbon footprint while taking the old products off the market in order to propose, henceforth, a Spanish local manufactured product only.

Today we are starting a new era, that of Trail 2. 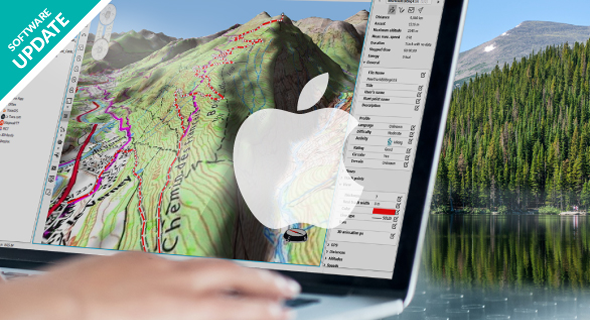 Congratulations Mac user! We have good news for you… Starting today, you can download Land 8.7 for Mac!

It took a while, but it’s finally ready! Enjoy a bunch of new features. Here are some highlights:

Transfer routes to your TwoNav GPS via Wi-Fi [MORE INFO]

IMPORTANT: The Land version for Mac works almost just like the Windows version. Mac and Windows computers, however, do feature different resources and work in different ways, so there are some differences between the two versions. At TwoNav, we’re working to bring all the features of the Windows version to Mac. If you use Land on a Mac device, we recommend you update Land to the latest version every so often to enjoy the new features.

Get the most out of Land and consult the user manual.

On Sunday, April 28, the Garmin Titan Desert 2019 began, 600 km of race through the Sahara dunes. A demanding adventure that attracts more and more cyclists every year who dare to face the harsh desert conditions.

The first stage saw 675 racers take to the desert route. Despite the difficulty of the terrain and the overwhelming heat, after 109 km, VIORCAM KH-7 team members Josep Betalú and Anna Ramírez were proclaimed winners of that day.

The second stage, known as the marathon, was marred by the tragic death of Fernando Civera, a 46-year-old cyclist who tragically lost his life.

The third stage was suspended out of respect for Civera’s death.

On Wednesday, the 1st of May, Anna Ramírez won her third consecutive stage and Josep Betalù regained his leading position.

Sylvain Chavanel, former professional cyclist, won the 5th stage. Anna Ramírez also kept hold of her title from the previous day with 17 minutes ahead of the general classification, making her the clear favourite. Josep Betalù continued to lead.

During the 6th and last stage, the riders gave it their all until they reached the finish line. Anna Ramírez won the Garmin Titan Desert for the third time. Josep Betalú, won the most difficult races in the world for the fourth consecutive time.

Trail Bike, makes it to the podium

The win has been possible thanks to Trail Bike, the GPS for extreme cyclists of the Spanish company TwoNav. A device prepared for orientation even in inhospitable terrains such as the Sahara desert.

A few days ago our Champion, Melcior Mauri, told us how he prepares his team, VIORCAM KH-7 for the Titan Desert. Now you can finally meet them…

This year, Melcior Mauri along with August Pascual, lead the biggest team so far to conquer Titan Desert 2019. With 35 racers and a technical team of 6 professionals, the members of ESTEVE KH-7 are ready to go for their place at top of the podium. Their chances a good this year, with Sylvan Chavanel, former professional cyclist (2000 and 2018), Josep Betalú, winner of the last three editions of the Titan Desert and Anna Ramírez, winner in the women’s section in 2015 and 2017.

Team VIORCAM KH-7 is a mix between professionals and amateurs, where most of them will be using the TwoNav Trail Bike during this multiple stage race. Among the Pro cyclists, Abraham Olano and Sylvan Chavanel, are the rest of the team who together pursue a personal and epic experience.

For Olano, this will be the third time he participates in the Titan Desert. Chavanel, who holds the title of the largest number of participation’s in the Tour de France, debuts in this adventure after his recent retirement last December 2018.

Preparation is the key factor

The training and preparation for such an ambitious challenge is not easy. In this video we tell you how Melcior Mauri prepare the ESTEVE KH-7 team for last years edition.

Titan Desert, the desert by stages

The Titan Desert is an ambitious race that has been held since 2006 in the Sahara desert. This year’s edition (14th edition) will take place from April 28 to May 3 and has a record participation of 675 registered cyclists.

Good luck to the whole team, see you at the finish line!