Profession: Degree in Physical Education and Sport. Nowadays editor of TRAIL magazine. Monica has an extensive experience in organizing sports activities and training in natural environments, an activity that is currently developing for La Nova Fita.

Sports experience: In 1997, Mònica began in Raiverd and from then until today has been around the world competing in raids. Among several sports trophies, raids, two world cup raids championships, the X-Adventure World Raid Cup Series (2000 and 2001). Monica has also won prestigious international raids as Ecomotion Brazil, The Challenge of the Volcanoes of Argentina and Chile, Max race and 7 Cerros of Medellin (Colombia) or the Camdex in Mexico. Who is Monica Aguilera?

A fan of the mountain activities, runner, cyclist and guidance. I’ve been around the world competing in adventure races and trail running adventures. My work has always been related to my hobby, and currently I work for Trail magazine and organize several outdoor events.

How do you define yourself?

I’ve been competing at my highest level for many years and I have learned from the victories and defeats, injuries, friendship, sacrifice and effort. Sport has taught me many things and I think that in part it has made me the person I am today.

I do not like leaving things half done, so I always try to do my best, whether in racing or work. I appreciate very much the camaraderie, teamwork and respect for others.

When did you begin to take sport more professionally?

I have never seen myself as a professional athlete, but my dedication to sport is taking a lot of time in my life. In my case it has been difficult but I’ve always been able to combine with sports-related jobs. The best years were at sponsorship level after winning the first Raid World Championship in 2000 and 2001.

What has been your biggest challenge until now?

For a long time winning the title of World Champions Raid, I must admit that it was not so easy. All competitors were in the spotlight, but despite this, I learned to compete at high level and demonstrate the potential. Thanks to that, I could repeat last year’s victory in 2001.

At the individual level, all these adventures have also been a significant challenge for me. For example, after many months with health problems, the Marathon des Sables back in 2011 (after having won in 2010). So it was something personal and I’m glad I could be there and finish the race in fifth place.

Which are your future goals?

After many years of spending summers working on races, I have in mind go on vacation with the bike through the central part of Europe as long as my health allows me to do so.

Tell us, why a professional athlete needs an outdoor GPS?

In my case, I organize outdoor activities, so an outdoor GPS is always a useful tool to prepare them. Although I also like to take long mountain trainings and then import the track to Land software to analyze the route: distances, slopes…

According to you, what is the most important feature of TwoNav GPS?

For me, the most important feature is the possibility to incorporate background maps in the application. I’ve always used maps from the Alpina editorial, so now I can put them as base element at the background of the application while I navigate, so I know where I am at any moment.

Finish the sentence… What I like the most of my TwoNav Sportiva is… the possibility to export and import data through Land. As well as the perfect accuracy to take data in real time. Thank you very much for this interview!

This is Aventura 2, the new TwoNav GPS designed for real explorers

We are proud to introduce at TwoNav  our ... 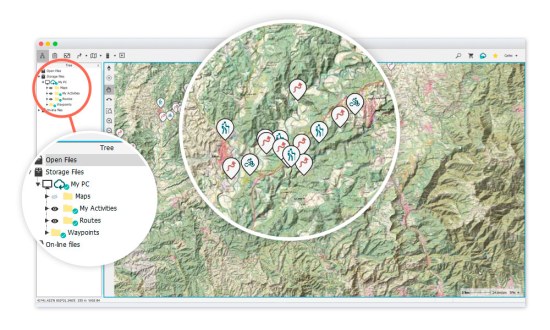